Can you describe the River Thames in one word?

This question was recently circulated on a social media platform, and some of the responses included words such as “diverse”, “alive” and “brown”. The word brown in the context of the River Thames reoccurs a lot, in fact the word Thames comes from its ancient name Tamesis which means dark. But why is the River Thames brown, and does its colour affect its wildlife and diversity? Let’s find the answers to these questions by looking at some of the river’s natural processes.

The River Thames is 346km long arising near Cotswolds, Gloucestershire. It runs through Oxford, Reading, Henley-on-Thames, Windsor, and the third biggest city in Europe, London. London grew out of a small human settlement that appeared over 3000 years ago. London’s location had, and still has, many advantages: it is relatively sheltered, several small rivers are running through it providing water and food, and, through the River Thames, it is directly connected to the North Sea. And because of this connection with the sea, the River Thames is under the influence of the tidal movement. 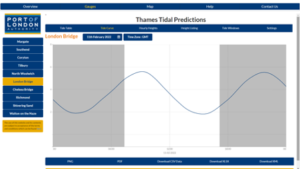 The tide moves in through London all the way up to Teddington and out to the North Sea twice a day. (Hence, we also refer to this section of the River Thames as tidal Thames, Tideway or Thames Estuary.) This steady movement of water causes the naturally occurring mud on the riverbed to resuspend, mix and move around within the entire water column. If you ever looked at the Thames closely from above, you notice this constantly moving layer of brown cloud. That is the resuspended mud and that is what gives the colour of the Thames. 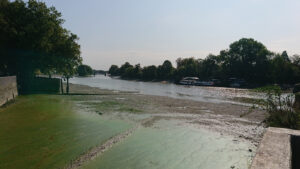 Mud is actually a very valuable element of a healthy aquatic ecosystem. Mud is a combination of soil, silt, and clay, and it contains important inorganic nutrients (such as nitrate, ammonium, and phosphate) which, thanks to the constant mixing of water, are released into the water column stimulating planktonic productivity. And where there is plankton, there are invertebrates, fishes, birds and mammals.

The recently released State of the Thames report highlighted that today the tidal Thames is home to over 115 species of fish such as the European eel, smelt, flounder and bass, as well as wading birds that feed on invertebrates living in the mudflats, two species of seals (harbour and grey seal) and harbour porpoise. 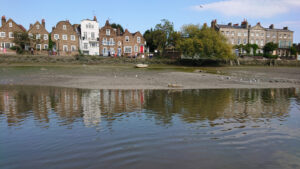 So don’t let the colour of the river fool you. The brown mud is what makes the tidal Thames a diverse and thriving river which in turn provides many opportunities for Londoners to enjoy the natural world. The River Thames also acts as a natural antidote, because being near or on water can help us relax, and it can boost mental and physical well-being.

If you want to experience the tidal Thames and learn more about its ecology and natural history, come and join our Thames Natural History Tours. Sessions are available every week from April through October.

Few people think about fins as being important equipment.  They are hidden away under your board so you see them briefly when setting …

Thames islands  There are around 180 Islands on the Thames with most of them in the middle reaches from Reading to Richmond.  …